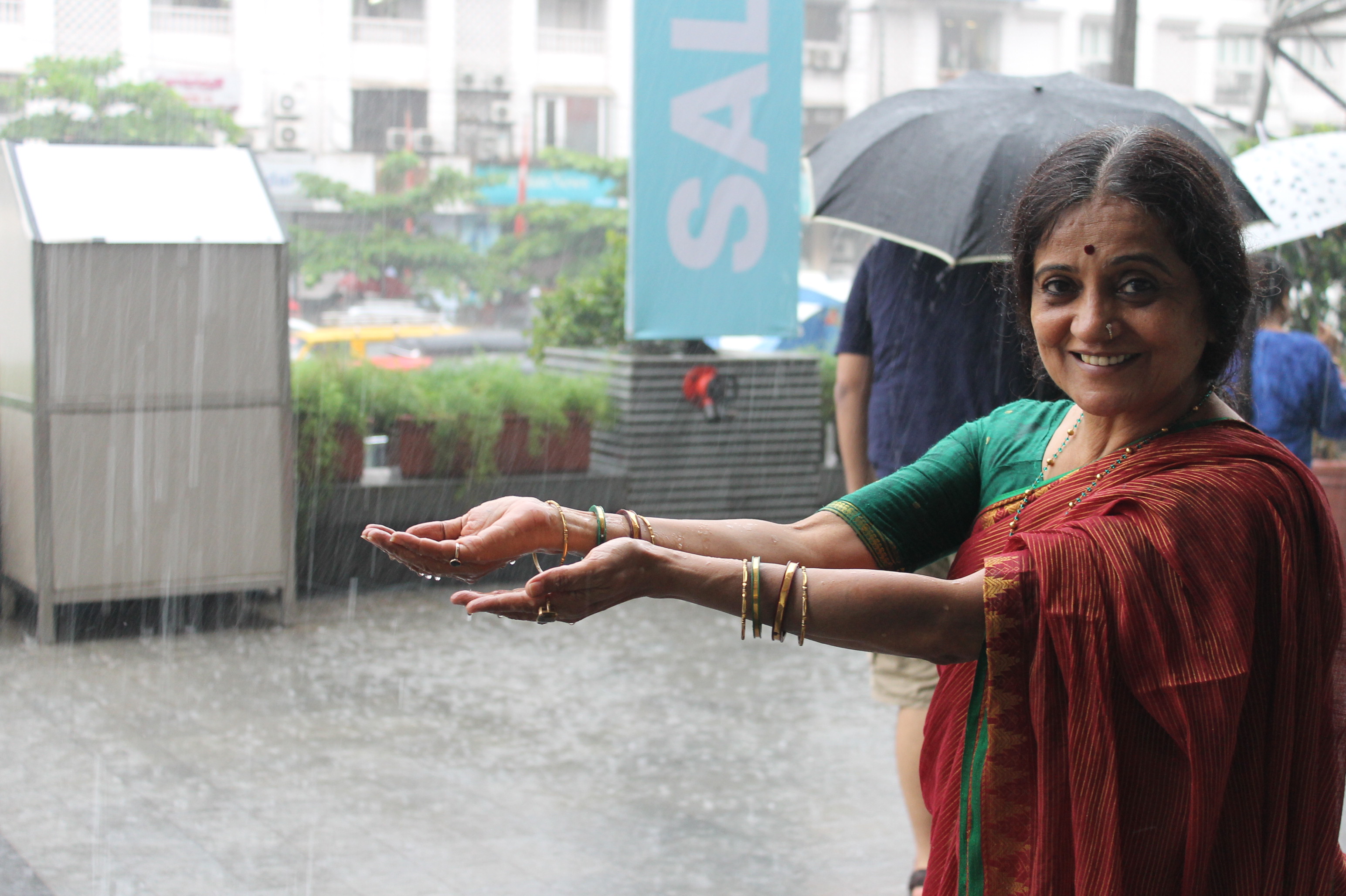 Very often the rain sequence was a transforming moment for the character or the story. Remember how Amitabh Bachchan walks Raakhee home under an umbrella in Kaala Pathar and they become soulmates? Remember a young Anuradha Patel driving older Naseerudin Shah in a tizzy singing ‘Mera kuch samaan tumhare paaas…’ in Gulzar’s Ijaazat? Remember an anguished Vinod Khanna singing ‘Lagee aaj sawan ki phir wo jhadi hai…’ in Chandni as Sridevi in present and Juhi Chawla in the past dance in the rain?

On top of my rain favorites is ‘Kaali ghata chaye mora jiya ghabaraye…’ from Bimal Roy’s Sujata, the story of a Harijan girl brought up by a Brahmin family. Self-assured in her simplicity she spends major part of the day attending to household chores. One such day, the sky line changes colour and the clouds thunder! Sujata runs to her room and throws open the windows to allow the showers into her life. The close-up shot of Nutan smiling at the clouds and expressing her desire for a companion is refreshing and sensitive.

Equally endearing is Mitthu (Shabana Azmi) in Gulzar’s Namkeen, when she sets out for her morning stroll shrouded in a flowing black shawl, shot amidst swaying trees and dew drops Asha Bhosle’s mesmerising ‘Phir se aiyo barkha bidesi …’ is among the memorable lyrics of Gulzar.

My favorite scene: Kajol watching Shah Rukh Khan on television in My Name is Khan. 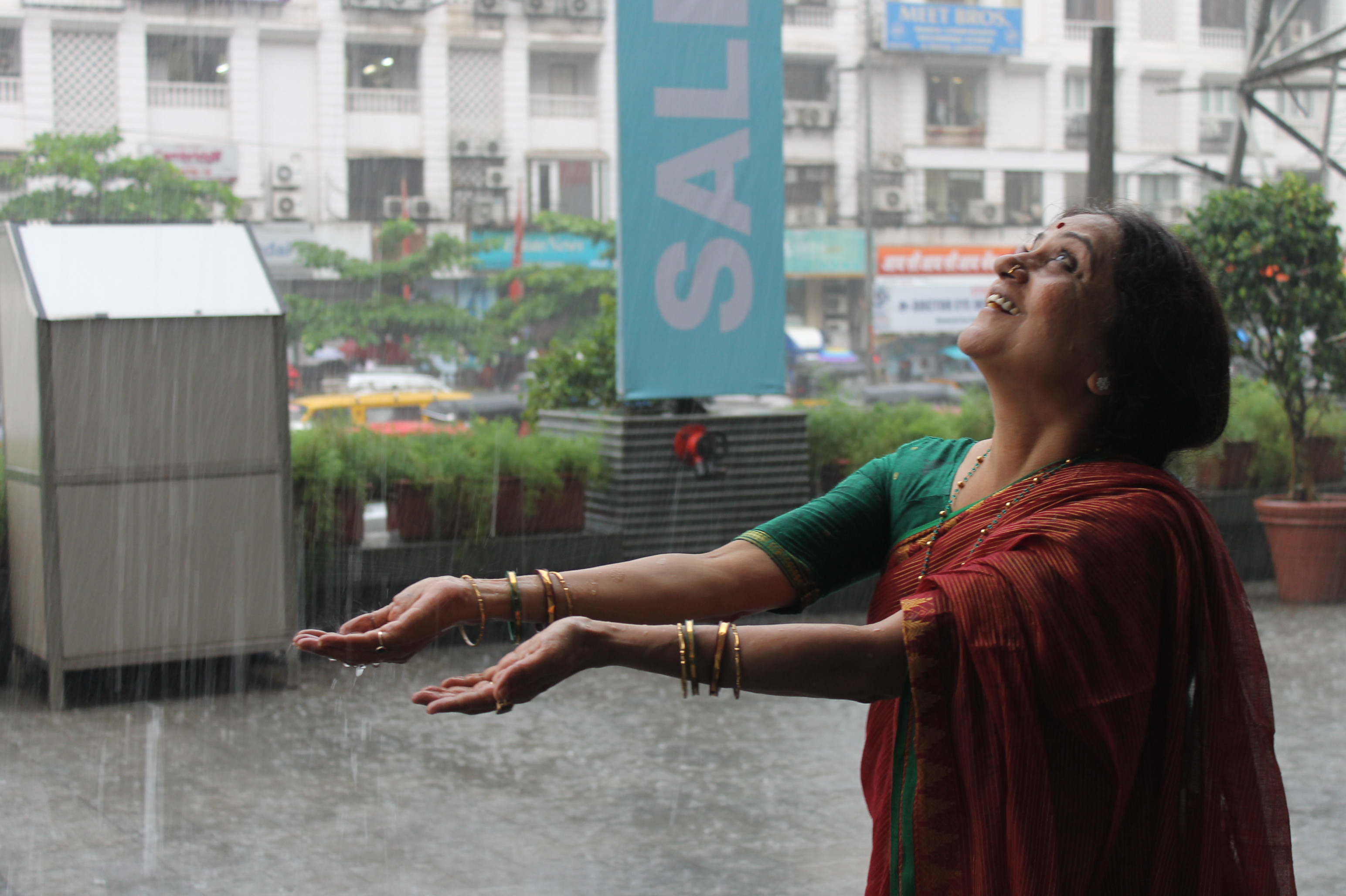 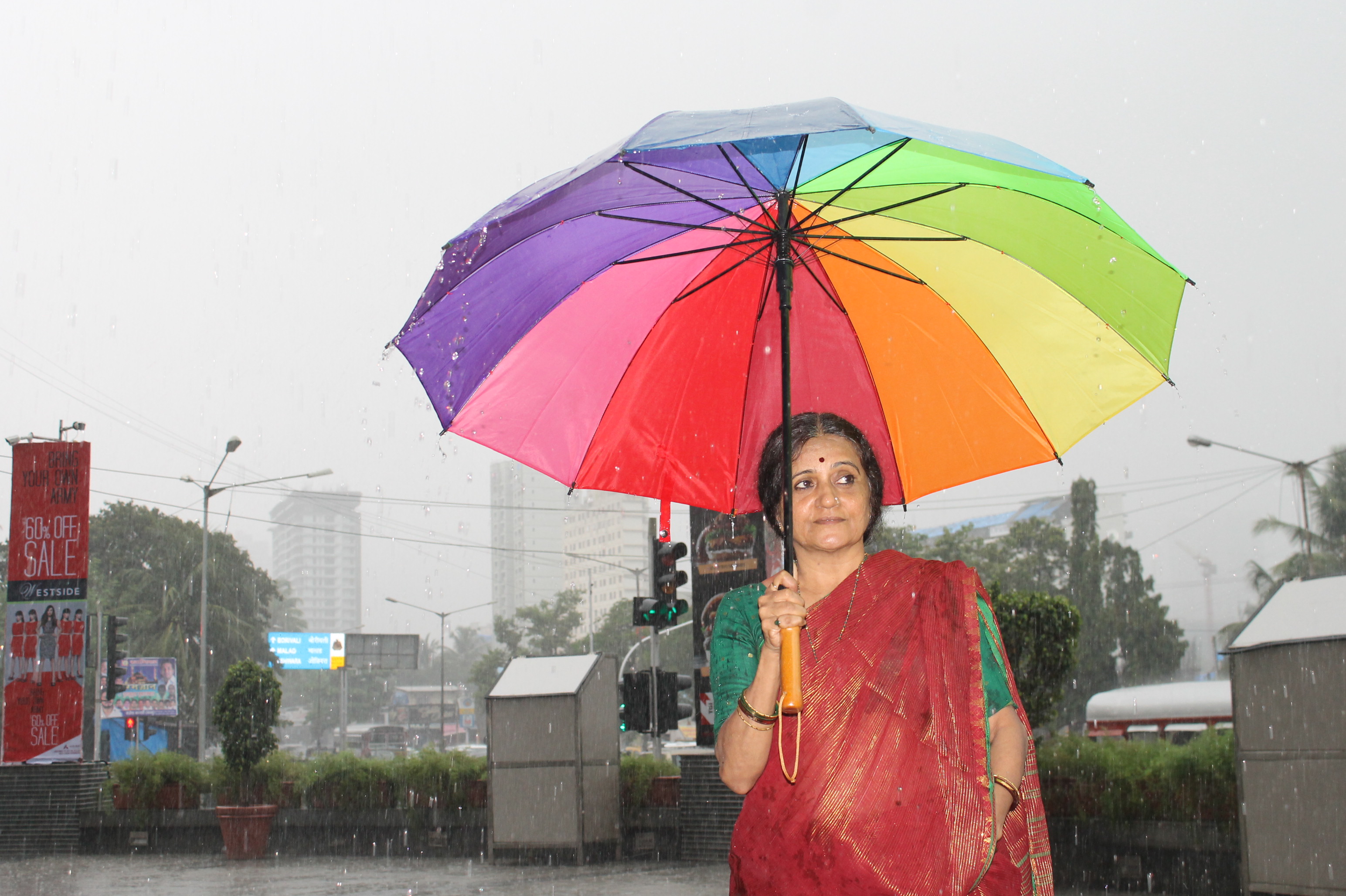 The rainbow has seven colors, the dancer on stage portrays eight roles, life offers nine emotions and the Hindu deity has ten avtaars. Have you ever wondered how many shades exist to monsoon?  Hindi films portrays a million moments of this romantic season.

Romance in Hindi films is synonymous with rain sequences. Much before the item numbers dawned into our entertainment business, rain songs were the only ticket to erotica in Hindi movies. Not all of them were explicitly sensual but they reflected a longing, an admission of desire and therefore all these songs were memorable. We remember some of these numbers for the extra-ordinary lyrics and the melody and some for the song situations and choreography.

In the coming two weeks I will unfold some mesmerizing moments of the Monsoon Magic and will also share one favorite song and scene of the magical season.

My favorite song for today is Tip tip barsa paani…

My favorite scene: Nargis fighting to save their crop and field in Mother India. 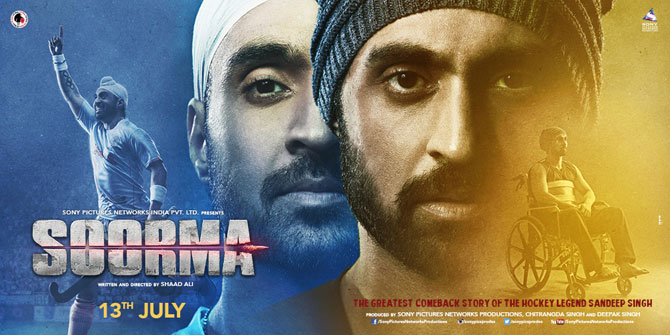 Enrolled into hockey training in childhood only because his older brother Bikramjeet Singh/ Angad Bedi was a serious player, Sandeep abandons the sport because he is disillusioned by his ruthless coach and his inhuman penalty.

As a teenager, love draws Sandeep to hockey again and he is skilled enough represent India in the World Cup Hockey tournament. He is on his way for the prestigious match when a near fatal accident leaves Singh paralyzed both literally and figuratively.

A life span has several accomplishments and defeats and it is impossible for a biographer to capture all the moods and moments, so director Shaad Ali and his writers Siva and Suyash focus on selective victories and vulnerabilities of the sport star and in the process takes some liberties.

Sandeep Singh took 3 years to recover from his spinal injury, in the film it happens faster.  In real life he suffered two near-fatal accidents, the film concentrates on one. The story ends on his Arjuna Award and conveniently makes no reference to Singh’s present state.

The positives of the film outweigh the negatives and these include authentic locations, dialect, costumes, art, music, and most important, an engaging narrative with sensitive writing and some refreshing moments.

All the performances are first rate: Satish Kaushik as Singh’s anguished father, Angad Bedi as his brother is the surprise packet of the film, Vijay Raaz as his coach and Kulbhushan Kharbanda in a sparkling cameo.

As Harpreet, Tapsee Pannu not just looks like an athlete but also plays like a professional.  Tapsee is as convincing while romancing/ crying or dancing bhangra at a family celebration.

As the highest goal keeper, better known as Flicker Singh, Diljeet Dosanjh portrays Sandeep Singh with purity and simplicity and touches your heart.

Soorma is not just about sports and sportsmanship.  It is about relationships, aspirations, endurance and most importantly, courage. It involves family, love, society and the entire country.

The YouTube ID of Insert video URL or ID here is invalid. 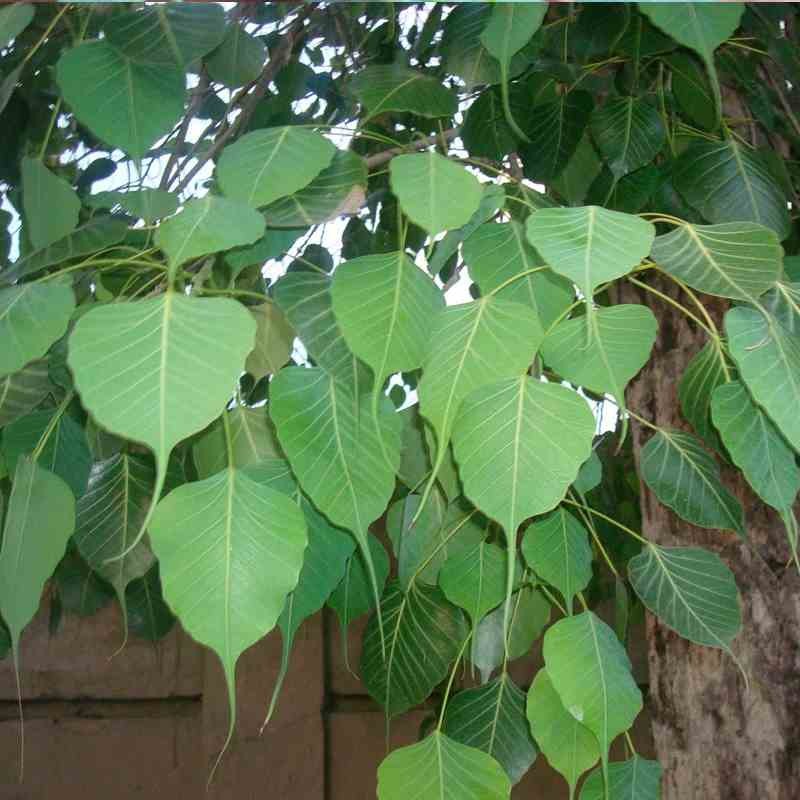 The brahmanas associate me with river Saraswati rising from the water pot of Brahma in the Himalayas.

The tribals in Bengal address me as Vasudeva and water me in the month of Vaishakh.

Parents who face difficulty marrying their daughters of age marry them to me and all of them soon find suitable grooms. In olden days, when remarriage was forbidden for widows, they were married to me and then allowed to remarry.

In many communities a marriage ceremony is not complete without a branch of my tree. The branch, along with a pot of water, is placed between the bride and the groom while the pundit chants the mantras. The presence of a Peepala leaf assures a happy and secure marriage because it has the blessings of Lord Vishnu and Goddess Lakshmi.

This concludes all the characters of the book 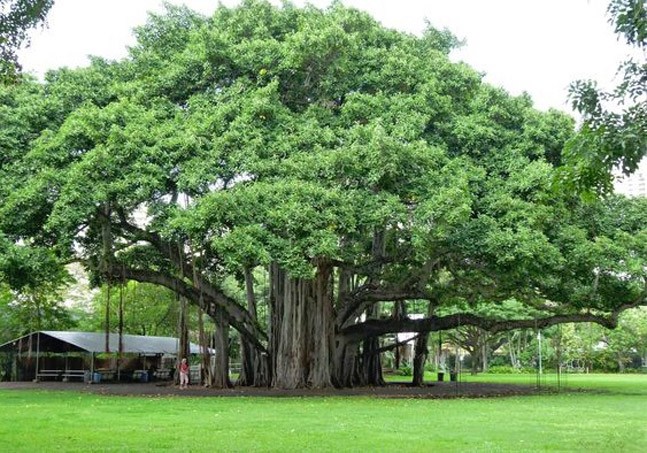 Ayurveda Science regards me as a medicine and has proved that my bark is used to yield tannin; my leaves, when heated, are useful in treating stubborn wounds.

Modern science says that movement is life and life is oxygen. Unlike other trees that blossom during specific seasons, I stand tall and green all through the year. I release oxygen all the time, day and night, which is why people usually feel better, seated beneath my shade.

I told you that my leaves flutter because Sri Krishna resides inside me and that is not the only fable. There are many theories elaborating this phenomenon. The Hindus attribute it to the ancestors who dwell inside me and continuously flutter to make us aware of their presence. This is also the reason why people bow their heads when they pass my sight. My rustling leaves have a mention in the Bhagavad Gita when Sri Krishna says, “O Ashwatha, I honour you whose leaves are forever fluttering…” 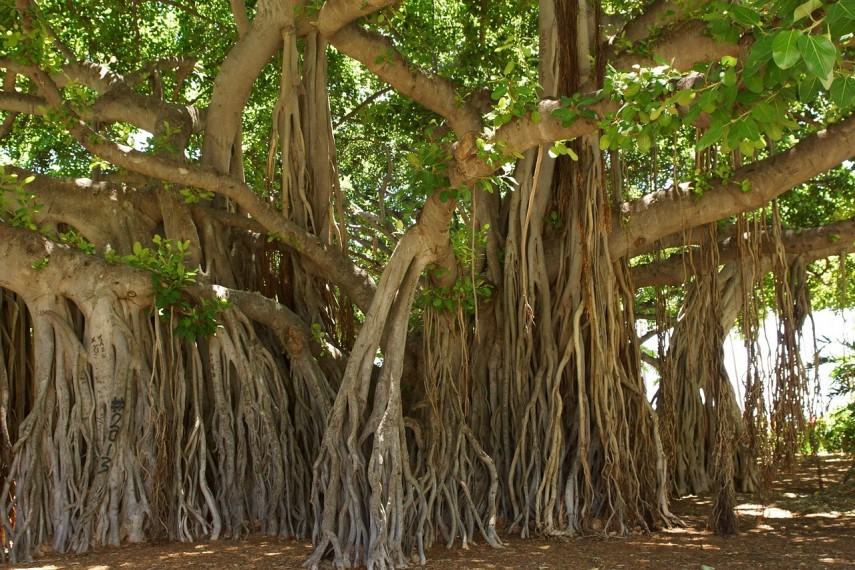 My roots are firm and my direction unchangeable.

I am planted to the east of the house or the temple and if faced in another direction, I refuse to grow. There are customs associated with me and those housing me have to follow these rituals.

I am the first-known depicted tree in India.

I am as ancient as the Mohenjo-daro civilisation.

I have been watching the universe for centuries.

When I turn twelve and enter puberty, the temple purohit or the Karta of the family performs the Upanayan ceremony. This entails building of a circular platform around me and invoking Lord Narayana, Lord Vasudeva and Goddesses Rukmini and Satyabhama.

The Neem tree is always planted beside me in a way our branches intermingle as we grow taller. On Amavasya night, many villagers perform a symbolic marriage between us. The Neem represents the Shivalinga while I, the Peepala, represent the yoni, power of the female. 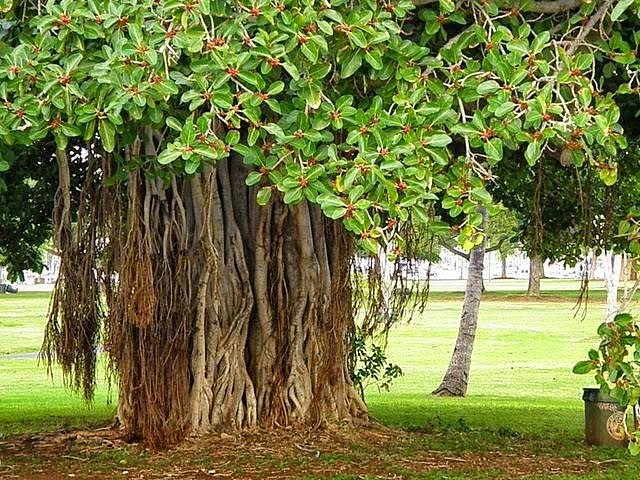 The Skanda Purana considers me a symbol of worship and professes that if a family without an heir serves and regards me as son, I will carry forward the family legacy for as long as I live.

The Upanishads refer to me as a metaphor to explain the relevance of the body and the soul: the body is the fruit which we see outside while the soul is the seed, invisible and internal.

It is beneath my shade that centuries ago, Goddess Sita took refuge in Lanka and Lord Hanuman visited her carrying the ring of Lord Rama. 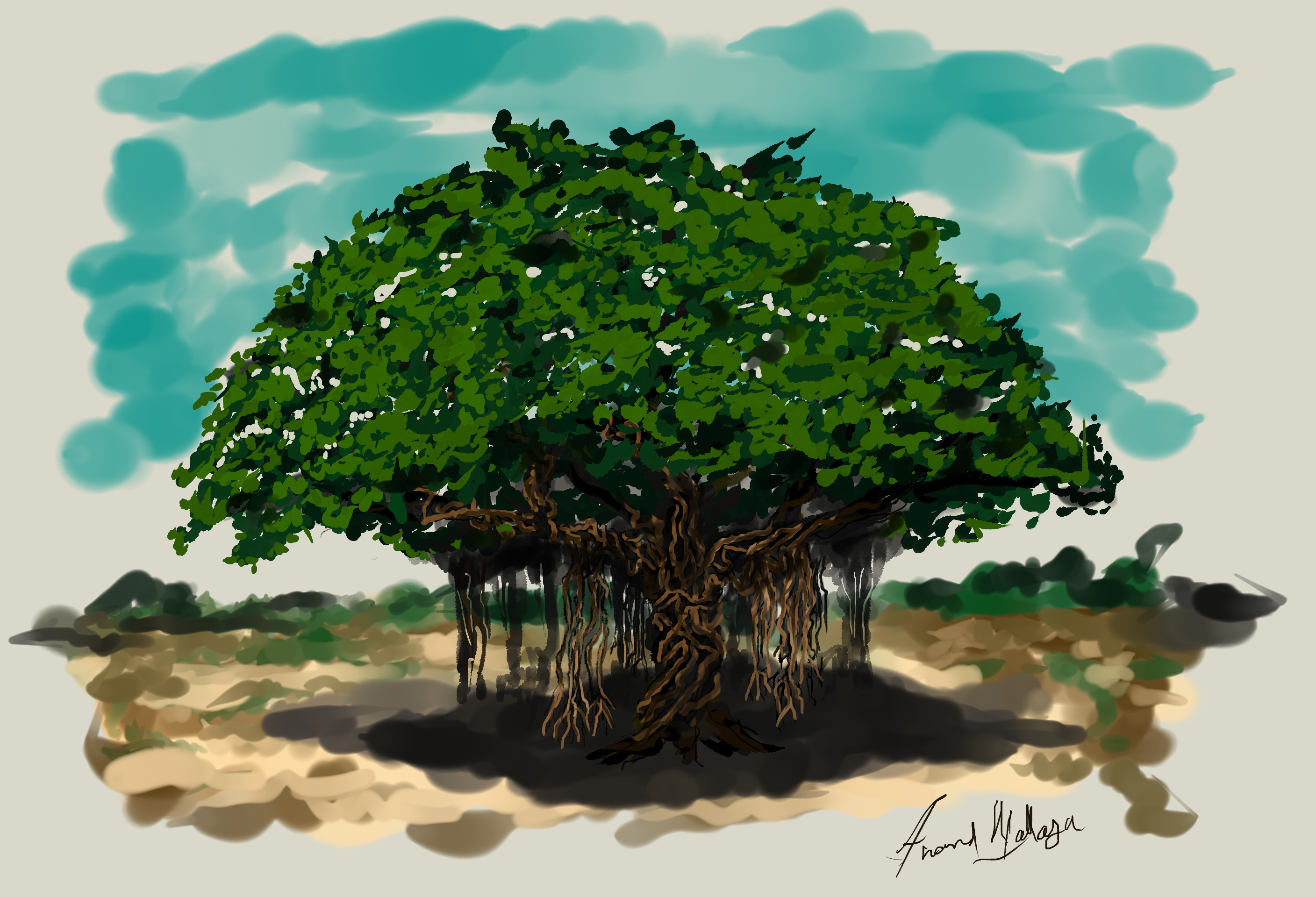 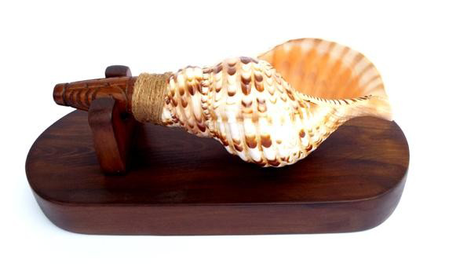 Ancient science used my shell ash described in Sanskrit as shankha bhasma, to cure all kinds of ailments. In those days I was soaked in lime juice and calcinated in covered crucibles innumerable times and reduced to powder ash.

I contain calcium, iron, and magnesium which make me antacid and cure all digestive problems.

My ash mixed with tamarind seed ash, five salts, asafoetida, ammonium chloride, pepper, carui, caraway, ginger, long pepper, purified mercury, and aconite in specified proportions, triturated in juices of lemon and is prescribed for wind, air and bile ailments, as well as for beauty and strength.

I am as popular in Ayurveda medicine as in prayer and worship. A powder made out of my ingredients is a cure for stomach ailments and beneficial to building strength.