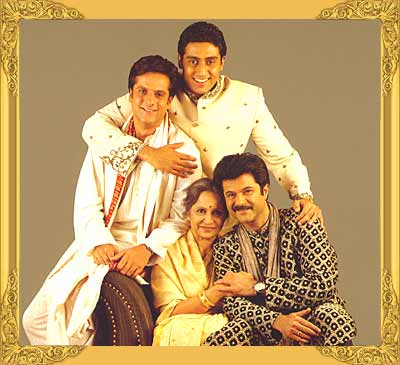 During lunch break, Abhishek Bachchan says that even though Om Jai Jagdish is a multi-starrer film, there is no sense of rivalry on the sets, “in fact it is like being part of a large family”. The set feels like a home with so many friends dropping by to congratulate the team.  There is Anupam’s wife, Kiron Kher, parliamentarian, Rajiv Shukla, producer Srishti Behl and some more.

In between shots, Kher finds time to tell me more about his film “It is about a joint family that needs to divide when the time is right. We have been fed on Sooraj Barjatya’s films that tell you about ideal families. Om Jai Jagdish says that a joint family is not a proof of love and living separately does not diminish bonding”. While we are chatting, we are joined by Om Puri who plays a florist in the film, Om listens to his director, says he plays a Muslim character and for a change does not speak in Urdu but in English “And that’s breaking a cliché” he adds. “It is exciting to work with an actor-director because he understands what an actor goes through.”